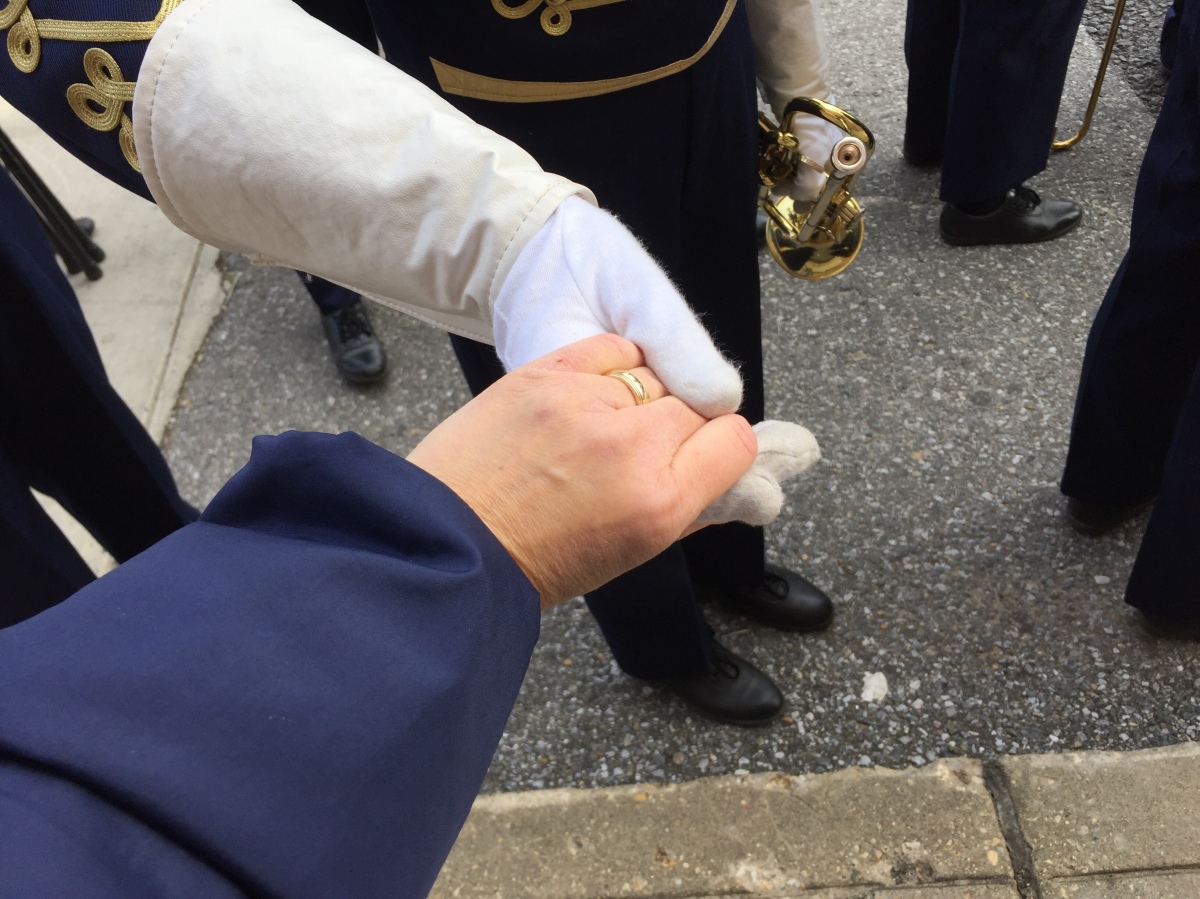 I spotted my daughter from thirty yards away.  She was standing in a circle with her friends and she was smiling. She didn’t see me yet so I studied her face. Her face is round with high cheekbones and full oval lips. Her eyes are ice blue and they look even bluer when she has her navy marching band uniform on. She’s beautiful. I’m so grateful that she still comes to me for hugs and I cherish her little giggle when she nestles her face between my neck and collarbone.  Some days she’s so sweet and we click, yet other days her words sting and we throw daggers at each other. I know my mouth was no picnic to my parents when I was a teenager so I pick my battles.

Finally she looks up and sees me staring at her. She smiles at me. Her smile makes me smile. With her eyes, she motions for me to approach her. I walked over to her and as I’d done many times before, I grasped her white gloved hand. It was always our special moment to grasp hands before she took the field in a marching band competition. I looked into her clear blue eyes. We didn’t have to speak, her eyes told me everything, “Mom I’m scared about this performance and the upcoming change”. My eyes responded, “I know baby. Go out there and play with your heart and it will all fall into place. It’s healthy, you’ll see”.  In our hearts, we both knew this was the end. There would never be another day like this. This was the end and it hurt.

Moments later, four chaperone band moms (my friends)  and myself, the nurse, escorted this marching band into the University of Maryland Stadium for Regional Championships. We always had such a great sense of pride as parents escorting them into stadiums, supporting this marching band and being in their presence. These musicians, our children played their hearts out.

Season change, people change and believe it or not, so do high school marching bands. Days after this picture was taken at the final competition, it was announced that this marching band would no longer compete through USBANDS. The band directors have decided to march the band in a different direction, literally. Next year they will continue to perform half time shows but they will transform from being a competitive field show band and become a parade band. Most of the band was upset to hear this news. Some cried. Some stormed out of the band room. Some planned on quitting. As for my daughter, her heart has been with that marching band since she was in fifth grade, the year my son began high school and entered that band. She’s a little upset too but her ability to think outside of the box will come in handy when changes are made to this band and I know she’ll go with the flow.

When I asked my daughter if we could take a picture of our hand grasp she agreed immediately, no questions asked. For me, it was a two part reason. The final marching band field show competition and something deeper. As a parent, it’s about finding common threads and establishing bonds with our children during each phase of their lives. It’s about sharing special moments like a hand grasp that they can remember and take with them throughout their lives. It’s about teaching them everything we know about life before they spread their wings and leave the nest. It’s about putting your own needs aside to tend to theirs. It’s about giving them your time.  It’s about accepting their coming of age and embracing it.

3 thoughts on “Seasons of Change”

Online dog training solutions for families on the go.

Reading under the light of a Carolina moon

Our small family living in a 5th wheel following Dads work as a rock fall technician... what could go wrong?

How to Start a Healthy Lifestyle

Prophet on the AT

My Journey on the Appalachian Trail

Autism is my Superpower! And it Freed Me

An adventure of walking: blogging a journey along the Appalachian Trail. These are the daily thoughts that bring a smile to my face, and hopefully to yours.